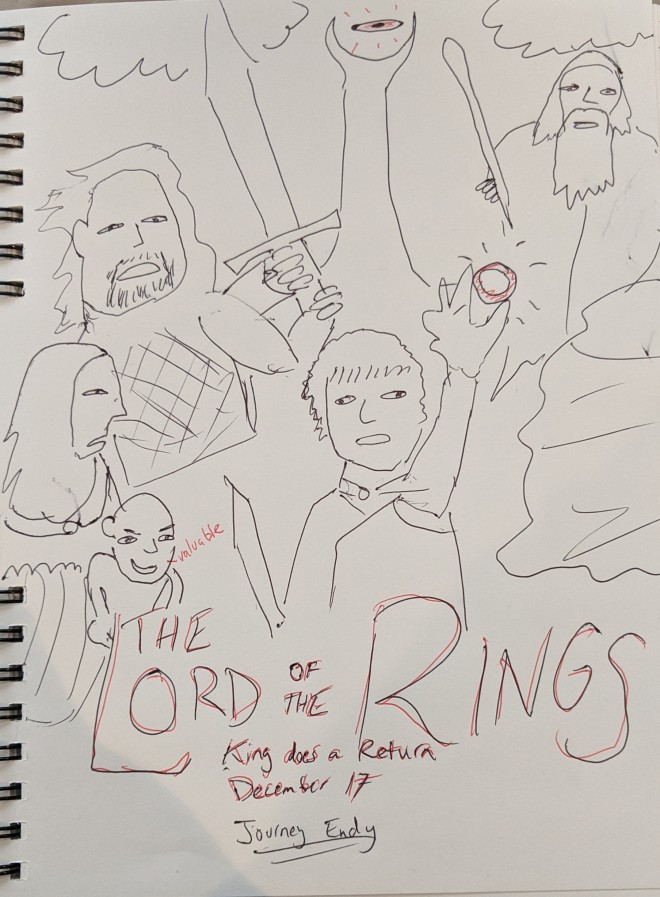 I hate fantasy. I can tell you exactly why, too. Fantasy is unrestrained creativity, and that tends to be a bad thing. When concepts get too far away from the real world, they become difficult to relate to, and universal themes can get muddled and involve too many leaps in logic. Sometimes you’ll see that many fantasy stories are more about the rules the author presents, and that’s fine for the most part. Other times authors fail to dictate rules, leaving the audience in the dark, scrambling around a world that the author and characters entirely understand – but you don’t. The latter dilemma is the one I most often point to when criticizing the broad genre of fantasy, and despite there being a fair deal of exceptions, it’s the mistake that has driven me away time and time again.

I’m sure most of you will be furious to hear that the work that inspired this post is the most universally adored work of fantasy ever created: The Lord of the Rings. I recently got around to finally watching all three movies (extended editions, of course. And yes, all in one sitting), and found myself both impressed and incredibly disappointed by them. The sprawling battle scenes are spectacular on a technical level and the CGI is perhaps the best to come out of the ‘00s, but my praise pretty much ends there. I have myriad complaints about the characters, the dialogue, and the overall plot – but what irks me the most is a relatively innocuous scene from the first film, The Fellowship of the Ring.

Gandalf (a stereotypical white-bearded wizard) visits his old friend Saruman (um, another stereotypical white-bearded wizard) to summon him in his struggle against Sauron (the evilest evil dude to ever evil), only to find out that Saruman has decided that Sauron is pretty cool and way stronger than Gandalf and the other do-gooders, so he’s evil now, too. We could dissect why Saruman’s introduction is abrupt and does nothing at all to establish that he and Gandalf were ever friends, but we can save that for another time. What I would like to analyze is the battle between the warring wizards that ensues shortly after. They’re chilling in Saruman’s gargantuan tower when Saruman locks the doors simply by looking at them and Gandalf frantically looks for another way out. Before he can, Saruman raises his magic staff and Gandalf flies into the wall painfully – clearly this is some kind of telekinesis. Let’s stop here for a moment: We already have an inconsistency that takes me out of the scene. Does Saruman need a staff? He locks the doors while holding his staff and not pointing it at anything in particular, except he deliberately indicates in Gandalf’s direction in his initial offensive. Both Gandalf and Saruman continue to wave their staffs around as the fight continues. Later on Saruman gains the advantage by reaching out his hand and telekinesis-ing Gandalf’s staff. So now he’s using his hand rather than his staff? Suppose the staff is used to channel or focus power and he simply uses his mind for the mundane stuff like closing doors – then why would he use his hand here? If his hand is where the power comes from, why have a staff at all? Once Saruman has both staffs, he points them at Gandalf and it seems like the good wizard is helpless while Saruman is even more powerful… so the power comes exclusively from the staff? Does that mean Gandalf is literally just a human with a long magic wand? Does the staff require decades of practice and that’s why the wizards are so special? Or is their power inherent to their being? All these questions and more distracted me from enjoying an otherwise unintentionally hilarious scene. Seriously, that scene does not deserve to be taken seriously even if you’re a person who isn’t bothered by erratic magical writing.

This scene is the poster child for the myriad issues I take with fantasy, and it persists throughout the nearly 12 hour runtime of the marathon. It’s exhausting: I’m trying to keep up with all these characters with funky names while also trying to understand a universe that fundamentally does not want to make sense to the audience. I’m not asking for heaps and heaps of expository dialogue to teach me everything I need to know about magic; that would be much, much worse. What I need is a baseline. I need to know what magic is. Can anyone use it? Is it tangible? Is it larger than a breadbox? All of these questions can be answered in a quick scene that perhaps serves a dual purpose; let me propose one: Frodo is pals with Gandalf so before they go off on their adventure, we have a scene where the two of them are fooling around with magic. Gandalf opens the mailbox (are there mailboxes in The Shire?) with his staff and Frodo, being the idiotic worthless little cretin he is, stumbles into Gandalf, knocking his staff out of his hand. The mailbox flap closes now that Gandalf is without his source of telekinesis and would you look at that, we’ve established not only that Frodo is a piece of garbage who deserves nothing but unadulterated hatred, we now understand how staffs and magic work. It ain’t perfect but it’s better than nothing, and Peter Jackson clearly has no qualms about including scenes that don’t advance the plot in any way.

You know what universe does make sense, grounds itself, and I can’t believe I’m about to adamantly defend? The Harry Potter universe. Harry Potter is incredibly, ingeniously simple: There are wizards. They use wands. That’s it. Of course, there are magic potions, magic staircases, magic newspapers, magic chocolate frogs, magic floating cars, magic plants, magic beans…the list goes on. But since the basis of magic is established – only wizards can use it and most magical actions require a wand – I can gladly accept any further intricacies. Since I understand the most basic rule in the wizarding world, I can suspend my disbelief much farther than I can with Lord of the Rings. What I know as law in the Harry Potter universe is only something I can guess at in Lord of the Rings, and that’s extremely alienating. Rather than feeling absorbed in this exciting new landscape, I feel like an outsider being constantly reminded that this is the creation of a real life human being rather than a living, breathing world of wonder. Harry Potter cleverly immerses you by suggesting that this world is just below our noses, an entire system that functions separately from the real world while still within it.

The idea of a fantasy world adjacent to reality works incredibly well, but it isn’t necessary to create immersive fantasy. Star Wars thrusts you into its fantasy with no basis in reality and yet it establishes The Force expertly, letting you know immediately that it is extremely rare, hereditary, and it’s basically just telekinesis. What’s that? Force ghosts? Force healing? Force projection? Look, let’s stick to the basics of the first film, please. Episode IV sticks to its fantasy rules and let’s leave it at that.

If you like what I consider to be bad fantasy, that’s fantastic, I have nothing against you. If you’re more willing to look past magical oddities and inconsistencies, you may be more sane than I am. But if you want to appeal to not just the hardcore fantasy lovers (or maybe it’s actually just me but I’m pretty self-important so let’s pretend this is a bigger problem than it is), your world needs to do its job and tell me how it works.

What’s the last dream you remember? I remember mine. I was being chased by a stick of deodorant, and not even the brand I use. It had eyes and a face and I was terrified, running away alongside some guy I went to camp with and haven’t seen in five years. It was real, though. In my dream, this was all real; I couldn’t explain it, it just was. When I woke up, I realized how silly it all was and I didn’t tell my family about my slumber adventure because they’ve said repeatedly that they despise hearing about people’s dreams. “They don’t make sense to anyone, not even you, so what’s the point in sharing them with me?” they say. That’s bad fantasy – if it doesn’t make sense, it’s not worth telling. Save the bad dreams for your therapist.