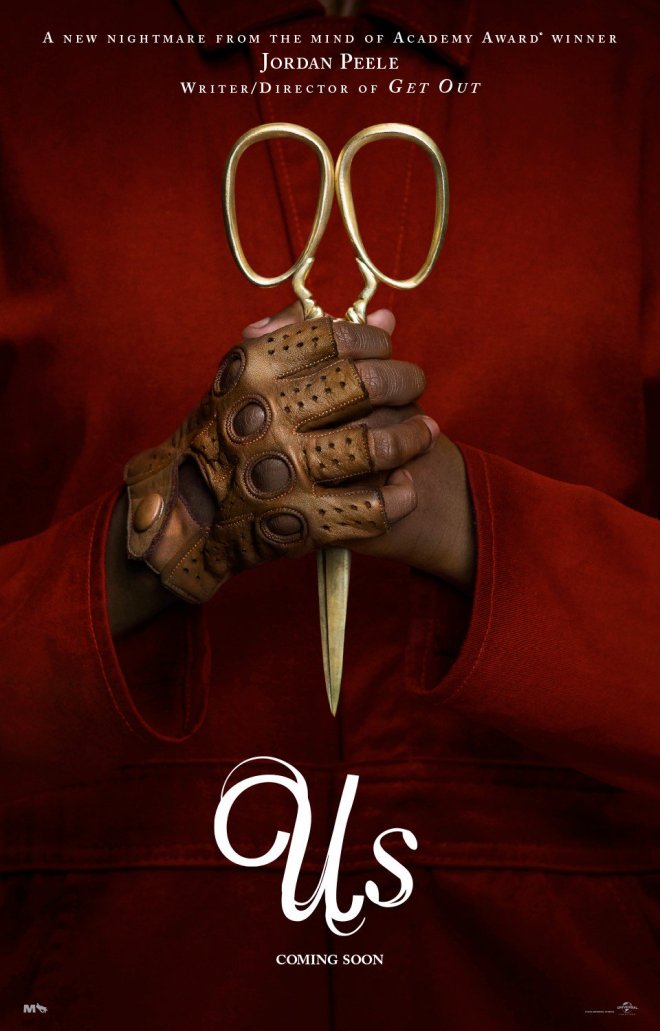 It’s Kubrick Week! Is what I’ll be saying next week, because I’ve postponed it. I’ve had too much work to do, and seeing Us in the middle of the week would’ve ruined everything. So instead, we have 4 movies and an anthology series to enjoy! Or, in the case of the anthology series, suffer through. I have at least a little to say about everything I’ve watched, so here are my reviews:

I’ve seen Horrible Bosses more than any human should be allowed to see Horrible Bosses. It’s one of those movies that I’ll never object to watching, so I end up watching it all the time. It’s the perfect mix of stupid comedy and even stupider comedy, and I will keep coming back to it every so often for the rest of my life.

The more I think about Us, the more I like it. I’ve had a few days to process it all since I caught an early screening on Wednesday, and though the negatives have stayed negative, the positives have grown on me even more.

What holds the movie back from being something truly great is the fact that almost all of the plot is presented to us in the last 30 minutes or so. Prior to that, the movie seems to be a generic, albeit well done, horror/thriller, and not a whole lot else. There are some lines dropped every once in a while that kept me intrigued, such as Adelaide’s double proclaiming that they are Americans, but the plot drips often aren’t enough to quench my thirst. The biggest issue presents itself in the second act, in which almost nothing of note happens and we only get a once again impeccably executed but traditional home invasion sequence.

The third act, however, turns it all around for me. I won’t spoil anything since the movie just came out yesterday, but there’s a whole lot to unpack here. What I will say is that Us creates an impressive world, rich with symbolism that me and Vic spent a long time discussing afterwards. And the score, my god, that score might be the best part of the entire movie. Remixing Luniz’s “I Got 5 On It” to make it haunting and disturbing is an incredible idea that elevates Us above most horror movies. Visually, Us gets everything right as well. It’s beautifully shot at times, and can make daytime scenes just as terrifying as those at night.

Is it better than Get Out? I’m leaning towards no, but that doesn’t mean Us isn’t worth seeing. Jordan Peele has proven himself to be one of the best new horror creators out there, and his politically driven voice shines through in both of his films in such clever ways, making him a guy to watch alongside Ari Aster.

Reservoir Dogs is the 7th Tarantino movie seen by Joey Caplan. Me and my friend Noah tried watching it many, many years ago, but we got bored. We were dumb back then. And less pretentious. Regardless of how I felt way back when, I thoroughly enjoyed Reservoir Dogs, but that’s no surprise. Tarantino is an incredibly pretentious genius, and I absolutely adore it. He can get away with being so obnoxiously pretentious because he’s such a fantastic writer. This dude can make an interesting conversation out of anything. The majority of Reservoir Dogs involves people talking in a mostly empty room, and it’s enthralling. He establishes his characters in a lighthearted diner scene, and immediately cuts to one of them dying in the backseat of a car, blood covering every inch of the leather. We have no clue what’s going on, but unlike Us, Reservoir Dogs gives us little bits of information constantly, so we don’t get frustrated by our lack of understanding. It’s not my favourite Tarantino, that still goes to The Hateful Eight (why oh why do people not like that movie? It’s brilliant!), closely followed by Inglourious Basterds.

What a shame. With David Fincher’s name attached, I had high hopes for an animated anthology series featuring 18 different studios and filmmakers, regardless of the fact that the main selling point seemed to be the fact that all of them are super “Not Safe For Work”. As it turns out, not a single one of the 18 shorts made me feel anything more than mild interest. The first short, Sonnie’s Edge, is a gory, sexy,  profanity laden mess, but I’ll admit, it’s a little fun. I also gave it a pass, because I thought that since it was the first, it tried to introduce the NSFW elements by packing them all in, allowing others to be more tame. That’s not the case. This is just a theory, but I’m almost certain all the filmmakers were told that it’s obligatory to have three and only three elements: gore, nudity, and a fuck-ton of swearing. Every short puts these elements at the forefront, and completely forgets to have interesting or likeable characters, or even a competent plot. I was only somewhat intrigued by Beyond the Aquila Drift, which feels very Black Mirror in premise, and actually uses its hard R rating productively.

Despite all the horrible plots and excessive vulgarity, it’s impossible to deny the talent and effort put into the animation itself. While many shorts take on an impressive but boring realistic CG style, others take more liberties, with astonishing success. Sucker of Souls and The Witness in particular show a dictionary definition of style over substance. It’s so upsetting to see this much talent go into stories that feel like a 13 year old kid wanted an excuse to see heads explode, see tits bounce, and hear the word FUCK about a trillion times.

Another strong week, once again marred by a single weak link. And a long one, too! There’s like 3 hours of animated shorts, and I watched all of them! 18 of them! And none of them are great! Not a single one! David Fincher, what the heck? I respect your name so much! Gone Girl is so good! Fight Club is good too! Panic Room isn’t, but I still respected you! I should watch Mindhunter, too. Anyway, shoutout to the upcoming Scooby Doo movie for casting Zac Efron as Fred! It’s a terrible choice, and I can’t wait to see how it goes!