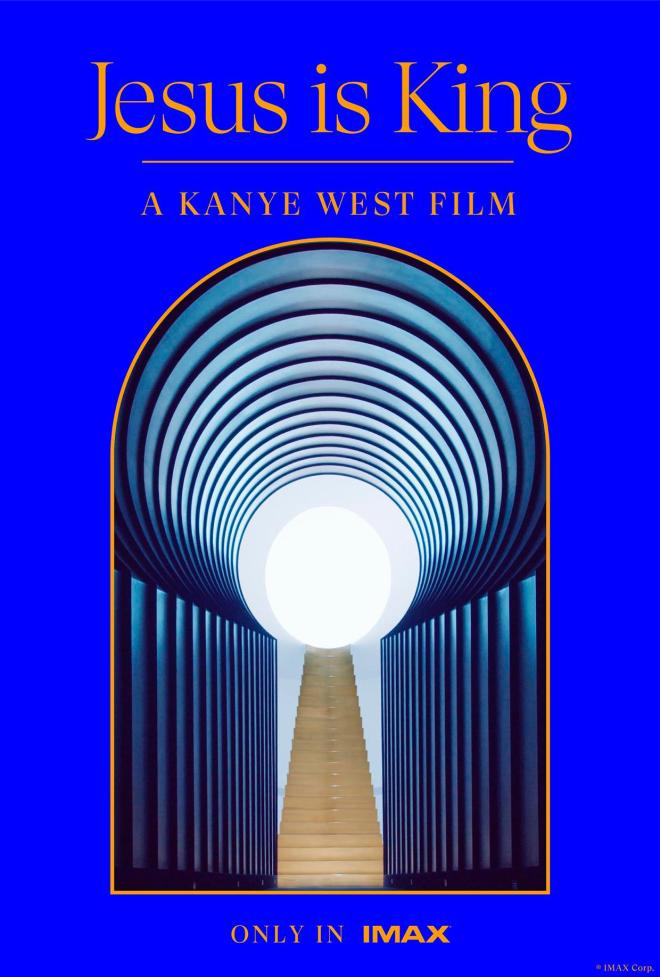 I said last week that my wallet was going to suffer irreparable damage in the coming days, and that certainly happened, but I would pay through the damn roof to have The Irishman play somewhere in Montreal. Hell, I’d even go to Laval to see The Irishman. Laval! And Marriage Story, oh god, I’d pay even more to see Marriage Story in theatres. I’m furious with Netflix and Cineplex for being so petty; just get over it! I don’t want to see fantastic movies on my computer for a relatively low price every month, I wanna see them at a ridiculously inflated price on a gargantuan screen! Anyway, I saw something like five movies this week and half a season of a fantastic Netflix TV show. Thank you, Netflix!

Good luck finding a bigger Kanye fan than myself. Yeezy has been a part of my life since my mother started playing the clean version of Graduation in the car when I was a child, and my adoration hasn’t waned since. Well, let’s say my adoration for his music hasn’t waned, because Kanye as a person is…problematic, to say the least. In the past few years, though, Kanye has been testing his fans’ patience. TLOP was great once you got used to it, but is a structurally unhinged mess of disparate tones. Ye is the closest Kanye has ever come to mediocre, featuring 7 good songs. A few are a little better than good, a couple are worse, but none can even stand near Runaway, Blood on the Leaves, Slow Jamz, Last Call, Blame Game, Ultralight Beam…the list of brilliance goes on. This brings us to Jesus is King, the infinitely delayed new album by our lord and saviour, Yeezy. The album is complemented by a half-hour film of the same name, and that’s what this review is actually supposed to be about. At some point there will be an album review, but it will show up in the most unlikely of places…

Jesus is King is a 30 minute music video, though not in the way Kanye has previously done it before. Runaway is accompanied by an absolutely insane and intentionally? unintentionally? hilarious video that follows an actual narrative, if you wanna call it that. Jesus is King is a series of predominantly static shots, none of them telling a story, but all of them beautiful in their own way. Many involve a wide view of Kanye’s Sunday Service Choir, an exclusive group of gospel folks Kanye has been touring with. One shot looks into the sky from a man’s feet as he conducts the choir, a wonderful waving of arms filled with effortless passion. Another follows a dandelion drifting about, all while gospel glory fills the theatre. It’s beautiful in its simplicity, and says but one thing: Jesus is King.

Parasite was my most anticipated film of 2019, as I’ve mentioned before. Bong Joon-Ho is a genius, and all the buzz around Parasite had me thinking he had gone even further beyond his previous greatness. I still like Snowpiercer more, but Parasite is undoubtedly fantastic.

Parasite is a perfectly balanced blend of comedy, drama, and thriller that coalesces into a film that any other filmmaker would almost certainly fail to execute. It satirizes both the unfathomably rich and the ambitious impoverished, all while being a hilarious and terrifying tale from a unique perspective. I’ll leave it at that until my Film Forensics post. What’s that, you ask? You’ll find out in a few minutes.

Oct 27: They Came Together (Noah’s computer, torrented I think?)

Wet Hot American Summer is one of the funniest movies ever made. Before Michael Showalter and David Wain came together again to do the somehow equally incredible prequel series in 2015, they made a movie I had never heard of and only got a limited On Demand release. Assembling possibly the greatest cast to ever come together using only $3 million, Wain made They Came Together. Paul Rudd and Amy Poehler star in this insane parody of rom-coms, a generic love story plot coming together with the stupidly clever comedy Wain and Showalter are known for. Not nearly as many jokes land as in their other efforts, but enough of them pay off extremely well, coming together when you least expect it. Michael Shannon shows up for a minute and cements the role of “Spike” as one of the best cameos of all time when he shows up to Amy Poehler’s wedding; he came to get her.

Bojack’s season ranking (excluding six, of course) is as follows: 5, 2, 4, 1, 3. That’s definitive. Is there any other TV show to ever peak at season 5? What other show is great for four seasons, and then reaches absolute brilliance right before the end? Oh, I guess Breaking Bad is the answer but, and I’m about to shock a lot of you, I haven’t seen it. Don’t hold it against me.

[Spoilers] Season 5 is Bojack’s rock bottom.  Scene after scene, he increasingly fucks his life up and alienates everyone trying to help him as he loses touch with reality. The penultimate episode is a delusional nightmare of self-destruction, something we’ve seen Bojack perform for so long, but this time he’s inflicting both mental and intense physical harm on others. He’s been a very bad horse from Horsin’ Around, but finally, thankfully, Bojack realizes the consequences of his addiction as well as his conscious actions, and he checks himself into rehab. Bojack has nowhere to go but up, a sentiment we’ve never felt before.

Season 6 begins with an episode that immediately displays Bojack’s fundamental change in the months he’s been in rehab. We see him helping a friend for no reason other than the fact that he doesn’t want to see her succumb to her own addiction once again. Don’t get me wrong, the episode ends up being horribly depressing as many episodes revolving around Bojack are, but this time, it’s not him making the horrendous decisions. Bojack is a changed man.

The rest of the cast has also changed, though not necessarily for the better. Princess Carolyn has a prickly relationship with her adopted porcupine, Diane battles depression, Mr. Peanut Butter must confront his mistake of having barked up the wrong human, and Todd does… Todd things. Not that Bojack Horseman needed to prove this any more than it already has, but this dumb show about an aging celebrity horse has some of the best, most dynamic characters to ever grace a screen. This season has as much depth as it does hilarious sight gags, a combination that Bob-Waksberg and the writers have perfected at this point. Bojack Horseman is genius, and season 6 hasn’t deviated from brilliance for a single second.

Put slashers in the same category as rom-coms. If there’s a great one, I’ll probably like it, but most of them are completely unenjoyable for me. Weak characters, no discernible plot, and a complete lack of care are par for the course. Slashers have become less popular since the turn of the century, and have been replaced in part by slasher parodies. Scream, The Cabin in the Woods, even the fucking atrocious Funny Games, they’re all slashers with a self-aware twist, and are far more popular than the very genre they’re both mocking and paying homage to. There are still movies like Saw (though is Saw really a slasher?) and Don’t Breathe that have managed to keep the generic slasher film alive, but movies like Hush and The Strangers: Prey at Night would make John Carpenter roll in his grave, except for the fact that he’s alive.

The Texas Chain Saw Massacre, a 1974 slasher, is one of the films that popularized the genre. I’ve always heard it’s absolutely terrifying, but I heard the same thing about the dead bore known as The Blair Witch Project. TTCSM didn’t bore me, but it failed to impress me in any lasting way. The acting is fairly decent for such a low budget project, and the first half hour includes a fantastically unsettling scene involving a crazy hitchhiker, but once the killing began, my eyes glazed over and I became entirely desensitized to the creepy but frankly tame gore and chase sequences. The first half of the movie seems to want you to care about the naive and unpleasant characters, but any semblance of a narrative or an arc is dropped halfway through, replaced by exactly what you’d expect. Why set up anything at all? Why not just make it an hour and a half of mindless murder? At least then I won’t be tricked into enjoying some of it, and thinking it’s going towards anything but a hilariously abrupt and silly ending.

Jojo Rabbit is the biggest disappointment of 2019. Taika Waititi directs, writes, and stars in this WWII drama/comedy/alleged satire, and though there’s a decent performance or two, Jojo Rabbit fails to justify its shallow existence. It has so much potential to be an insane comedy, but it throws it all away for a generic forbidden friendship plot we’ve seen a hundred times. Taika is talented and I have no doubt there’s a good movie buried under all the muddied themes and poor pacing, but Jojo Rabbit fails to be a cohesive whole. I have a whole lot more to say, but I’ve saved most of my review for a Film Forensics post. Oh, by the way, I’m changing Examination Collection to Film Forensics because Examination Collection is the most boring combination possible of two already boring words.

This week’s shoutout goes to Ed Norton, a guest star in the pilot of David Wain’s 2003 single season sketch comedy show, Stella. That’s all he’s known for. Haven’t seen him in anything else. I feel like this Ed guy has a career ahead of him.