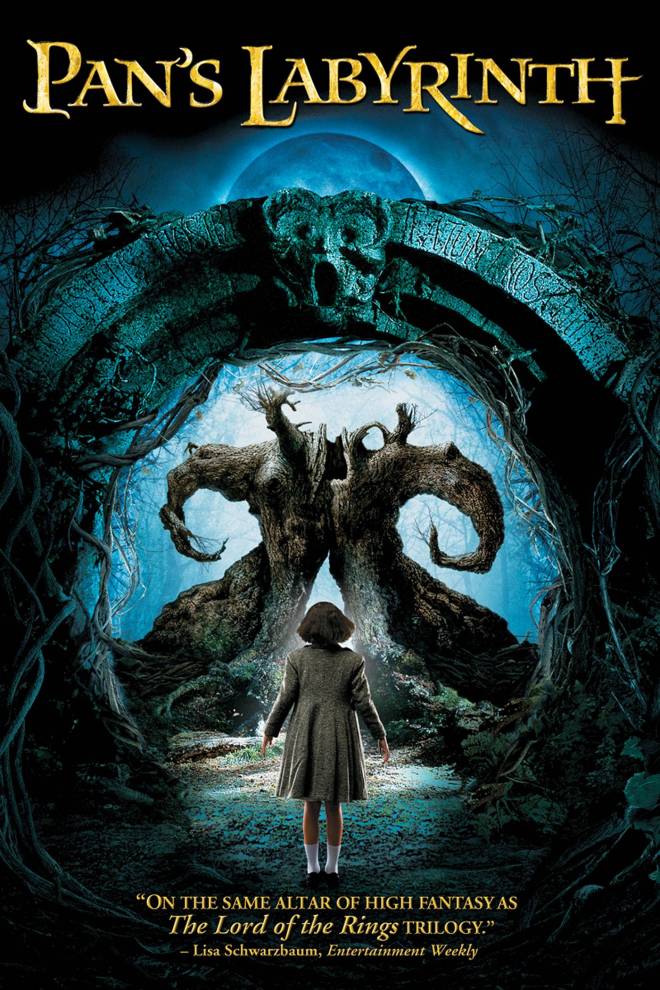 We’re only 39 days into the new year, and I’ve already seen two movies that I’d put in my top 10 worst of all time. That’s rough. But every once in a while, a movie comes along and knocks my socks off, redeeming the entire week! This is not one of those weeks. Regardless, I’ve seen 6 movies and one TV show this week and have at least a little bit to say about all of them, so here they are:

Feb 4: Pan’s Labyrinth (Crave)
No movie that has ever been described as “the best movie of all time” could ever meet those expectations. Pan’s Labyrinth, despite being very good, is no exception. Not only have I repeatedly heard it referred to as a masterpiece, but I’ve also seen the Guillermo Del Toro exhibit at the AGO, and have seen the ins and outs of the various creatures featured in the movie. As a result, their effect is kinda lost on me due to my familiarity with them. All that is pretty much a lengthy excuse for why I’m not gonna call Pan’s Labyrinth incredible.
This is the 3rd Guillermo Del Toro movie I’ve seen, and the first one I’ve actually enjoyed. Hellboy was fine but doesn’t hold up as well as people think it does. The Shape of Water is a movie that may be decent but I couldn’t get past the fact that it’s about a lady having sex with a fish-man-god that is at no point confirmed to have an intellect superior to an actual fish. Michael Shannon is fantastic though, and his character is genuinely one of my favourite villains ever. Pan’s Labyrinth has a fantastic villain of its own, one of the things that really stood out to me. I was expecting the creatures to be the antagonists, but instead we have a very human monster in that spot.
Another expectation I had was that Pan’s Labyrinth is a horror movie. It isn’t in any way; I’d describe it more as a wartime drama with some fantasy elements thrown in to make it more interesting and metaphorical, which is not a bad thing at all. It explores a war I know pretty much nothing about, that being the Spanish Civil War, and I appreciate being able to learn a bit while being entertained. But all of this comes together, and I still felt like something was missing. I can’t put my finger on what. I genuinely want to understand what makes it considered such a masterpiece, because I’m willing to call it that once I hear a compelling argument. It’s not like No Country For Old Men, a movie that I don’t believe deserves the immense praise it gets no matter how many people tell me how terrifying and fascinating Anton Chigurh is. If anyone wants to tell me why I’m wrong about Pan’s Labyrinth, this is the one time I’d be willing to hear you out.

Feb 5: Most Beautiful Island (Amazon Prime Video)
Clocking in at only 8 minutes longer than Infinity Baby (the best movie that nobody has ever seen), Most Beautiful Island is a short but well made drama that has a point to make and it makes it. The film focuses on a Spanish immigrant barely making ends meet in NYC, and we spend pretty much the first half of the movie seeing just how much her life sucks as a nanny, and this half also serves to remind me of why I hate children. The plot effectively begins after, and we’re introduced to a mysterious party for rich people. It’s pretty predictable thriller fare from then on, but it’s done well enough to keep it tense. The political commentary is a little on the nose but is always integrated into the plot seamlessly, so it improves rather than hinders the overall package. It’s also very well shot, and reminds me of Good Time, one of my favourite movies of 2017. Decent little movie, but don’t watch it if you’re not a fan of spiders. Or immigrants.

Feb 5: Funny Games (Amazon Prime Video)
Michael Haneke can go fuck himself. This movie is the most self indulgent waste of time I’ve ever experienced. I truly cannot believe I spent nearly two hours of my life watching the most boring movie ever just for the movie to turn around and give me a massive middle finger. Sure, it’s all on purpose. Who gives a shit? Just because I was bored out of my mind doesn’t mean some commentary on voyeurism in horror movies makes it even the least bit redeemable. You know what a good horror commentary movie is? The Cabin in the Woods. That movie was never boring, and never made me want to strangle the writer/director. I hate that I’m even writing this review, because it’s probably exactly what Haneke wants. He made a movie with the intention of it being pointless, and knew that a certain subset of people would eat it up, and they did. They fucking did. Are you happy, Haneke? Fuck you.

Feb 6: Russian Doll (Netflix)
It’s Groundhog Day with an action twist! Wait, I’m describing Edge of Tomorrow. It’s Groundhog Day with a horror/comedy twist! Wait, I’m describing Happy Death Day. It’s Groundhog Day with a historical fantasy twist! Wait, I’m describing Miss Peregrine’s Home for Peculiar Children. It’s Groundhog Day but it sucks! Wait, I’m describing Naked. It’s Groundhog Day but there’s two of them living the same day over and over! Hey, that’s the one! Russian Doll also features the twist of being a TV show, despite having only enough interesting content to be a longish movie.
The first few episodes of Russian Doll bothered me a lot. It takes until the cliffhanger at the end of episode three to finally get past the generic Groundhog Day fare, which is far too long in 2019; everyone already knows how it works. It also took me far longer than it should have to warm up to Natasha Lyonne, who I initially thought was giving an awful performance. I stopped noticing her acting later, but I still think it’s pretty shaky.
Once Alan, Nadia’s fellow day re-liver, gets introduced, the show finally picks up. Better late than never, I suppose. The next few episodes are relatively traditional Groundhog Day episodes, but I like the characters and the fact that these strangers have to work together to solve the mystery is…cute. And then it gets weird.
The last couple episodes are kinda confusing and outstay their welcome, especially the finale. Once we find out what’s really going on, the show chugs long after it had already made its point. The final episode is only about the two of them trying to solve their “true” day, and it takes about 20 minutes longer than it should to wrap up the story for good. When it does finally end it feels unearned; it implies romance when 1: they have literally just met and 2: I never felt any romantic connection (even when they sleep together), but that could just be me. The show doesn’t come together as well as I wanted and expected it to, and left me with a feeling of overwhelming meh.

Feb 7: Await Further Instructions (Netflix)
I was ready to get really angry at Netflix for having a major visual spoiler as the thumbnail for the movie, but then I saw a poster, which is just as bad. So I recommend this movie by getting somebody else to select it and then watching it, strange as that may seem. It’s a sci-fi thriller/horror with a simple premise: dysfunctional family trapped in their house by mysterious force, and the TV tells them to do progressively darker and suspicious things. The characters are good, and it genuinely kept me guessing the entire time; I really can’t ask for anything more from a horror movie in 2019. There was a second there at the end at which I thought it was all gonna fall apart, but it pulled itself together just in time. It’s not perfect, but it’s better than 90% of these kinds of movies out there today so I would give it a watch.

Feb 8: 17 Again (Netflix)
I realised halfway through watching this movie that I would be forced to review it. I regret nothing. This movie is a hilarious disaster. Zac Efron does his best to play a 17 year old Matthew Perry, with results that range from nearly incest to nearly statutory rape! It’s fun for the whole family!

Feb 8: He Never Died (Netflix)
This is a mediocre movie that’s occasionally elevated to greatness due to Henry Rollins’ performance. I feel like the director purposely cast bad actors in every other role just to make him look better, and it totally worked. Rollins plays an immortal dude with an unfortunate need to drink blood every once in a while, and his life is turned upside down once he finds out he has a 19 year old daughter. Except he treats all of this as if someone told him that his neighbour’s water cooler ran out of water, that is, he doesn’t give two shits. Every line he says is the deadest of pan, and I don’t think his face ever reacts to any outside stimulus, ever. Pretend the plot doesn’t exist and watch this one for Henry.

The best thing I can say about the things I watched this week is that they were all more entertaining than the Super Bowl. Okay, maybe not Funny Games, but I enjoyed being angry at that movie a whole lot. A week of unremarkable movies means next week is going to be fantastic so I eagerly await the next batch, starting with Upgrade. Shoutout to the girl I went on a date with this week who told me Funny Games is one of the best movies of all time and made me discuss the Israel/Palestine conflict, it certainly kept things interesting!